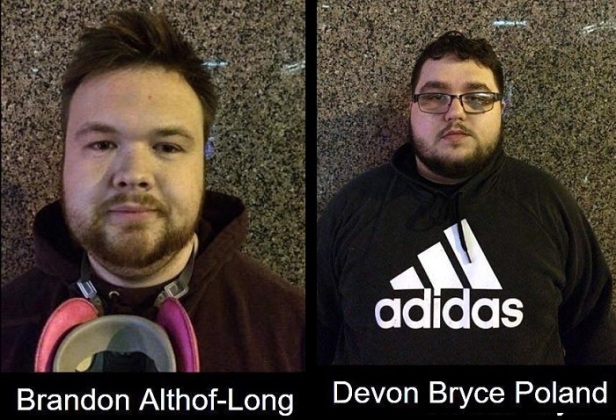 (6-8-20) The following are remarks from U.S. Attorney Justin Herdman during a press conference to announce federal charges against two Pennsylvania men that were arrested and charged for traveling to Cleveland to commit acts of violence.

“We are here to announce arrests early this morning of two Erie, Pennsylvania men – Brandon Michael Althof Long and Devon Bryce Poland – for a number of federal offenses, including transporting a firearm or incendiary device in furtherance of civil disorder and conspiracy to use fire or an explosive in furtherance of a federal felony. Special Agent in Charge Eric Smith will address the particulars of these charges at the moment, but in summary, Althof and Poland traveled to Cleveland from Erie on Saturday, May 30 and, among other items, had in their possession a Glock firearm, a hammer, lighter fluid, and spray paint. Hardworking members of our office, along with members of the FBI’s Joint Terrorism Task Force, assisted by the US Secret Service and Westlake Police, obtained probable cause to search the cellphones of Althof and Poland, wherein additional evidence was developed.

In short, Althof and Poland were not from here, they arrived with weapons and the ingredients for incendiary devices, the inserted themselves into a Constitutionally protected demonstration in order to advance their own violent purposes, and they were ultimately found in the midst of unprecedented rioting and looting in the streets of Cleveland. So let me get out in front of any questions as to whether there were out of state agitators who hijacked last weekend’s peaceful protests for their own purposes. The answer is undoubtedly yes, as seen with respect to today’s arrests

Althof and Poland represent the first two federal arrests stemming from last weekends riots. And they were, by any definition, riots that disrupted the end of a lawful and peaceful assembly of well-meaning citizens. We are working on numerous additional investigations associated with those riots, pursuing a number of potential federal charges involving a series of individuals who are responsible for the destruction of our downtown.

The men and women of the U.S. Attorney’s Office, the FBI, and the ATF are part of the Department of Justice. And what we do through our work, in this district of 6 million residents and across the country, is hold people accountable for their actions.

We are doing just that with our investigations related to the widespread looting of Cleveland’s downtown. We are also doing that in other areas of our district, including Toledo. Last weekend, if you burnt a car, broke into a store, or beat somebody up, then we are going to find you and hold you accountable with federal charges as appropriate, or if not, by assisting our county prosecutor partners with state charges.

And our obligation to demand accountability does not stop with those who rioted and looted. We are still engaged in a consent decree with the Cleveland Division of Police. Accountability is a huge part of that process, and we intend to engage productively, as we always do, with the city on the events of last weekend. You will get no disagreement from anyone here on stage – if there was behavior amongst police officers that departed from our very high standards, or establishes a violation of law, then you better believe that they will be held accountable as well.

The voices of the protestors and demonstrators last Saturday, and in several marches this week, echoes not only in our ears, but in our hearts. I hear you, we all hear you, and I believe that we are all seeking the same thing – accountability, justice, and future days and nights free from fear, anxiety, and victimization. The people up here are all committed to ensuring that you continue to have the ability to do exactly what the Founders intended: to peaceably assemble, to seek redress of grievances, to petition the government. We all swore to uphold the Constitution, which means that we swore to uphold your right to do so. And we will ensure that when you speak, you will be heard.”