(2-28-18) Celina City councilman Myron Buxton voted “no” on first reading of an ordinance authorizing City Safety Service Director Tom Hitchcock to advertise the notice of public auction of the land located (zoned for business) on the southwest corner of the intersection of Ash and Center streets, next to the Celina-Mercer County Chamber of Commerce.

The lot is used by both Zuma Automotive and the Chamber who uses it for parking. 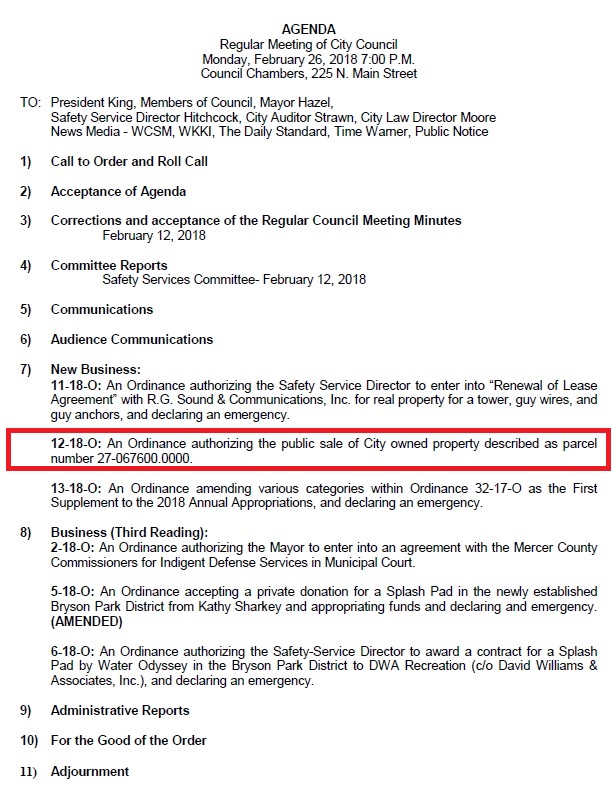 The Chamber wants the city to pave it for visitors to have a place to park, the city told Chamber officials it was not an option. But they would discuss the public sale of the property.

The concern is who will end up purchasing the property.  Zuma Automotive, owned by Jeff Link,  in the past has added gravel and maintained the property. But with the recent relocation of the Chamber parking has become an issue. Another option to be considered is the property being being purchased by a third party, the new land is located across the street from the new park project.

The land was a ‘gift’ to the city, which has not done much to improve the area in the past.

Council will consider it again at the next council meeting.

“The dead baby is yours,” the first woman yelled. “Mine is alive!”

They argued back and forth in front of Solomon, 23 until finally he said, “Both of you say this live baby is yours. 24 Someone bring me a sword.”

A sword was brought, and Solomon ordered, 25 “Cut the baby in half! That way each of you can have part of him.”

26 “Please don’t kill my son,” the baby’s mother screamed. “Your Majesty, I love him very much, but give him to her. Just don’t kill him.”

The other woman shouted, “Go ahead and cut him in half. Then neither of us will have the baby.”

27 Solomon said, “Don’t kill the baby.” Then he pointed to the first woman, “She is his real mother. Give the baby to her.”