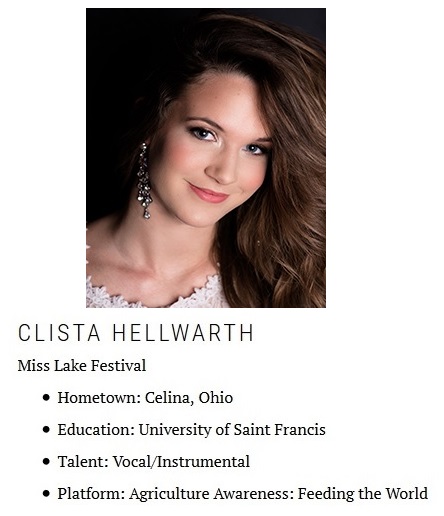 (6-8-18) Parkway graduate and current Miss Lake Festival Clista Hellwarth starts her quest for the opportunity to be crowned the new Miss Ohio starting this weekend in Mansfield.

Hellwarth, who just finished her freshman year at St. Francis, competed on the track and field team and placed 3rd in the javelin throw at the Crossroads League meet and was named to the All-CL team .

Local residents can help Hellwarth win the pagaent by casting an online vote (cost is $1.00)

Hellwarth will be joined by three local Ohio Miss Outstanding Teen candidates, including Miss Lake Festival’s winner Kaycie Wissman of Minster, plus two Celina candidates Julianna Lee who won the Miss Tallawanda title and Maleah Lee who picked up the title at the Miss Heart of Ohio pageant.